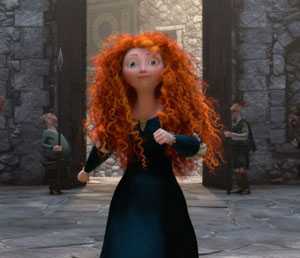 Brave is an odd movie for Pixar. It’s so traditional! Girl doesn’t want to get married, runs away, magic curse, makes peace with mom, happy ending. About the only surprise is that she doesn’t find some other boy to marry.

It has some odd discrepancies too, weird loops that I wouldn’t expect from Pixar. How is Merida able to sew anything on the back of a charging horse? Why is her final speech to the three clans so passionate and moving when she’s delivering it in such a halting fashion, glancing at her mother every few seconds? And why didn’t the kooky witch and her raven return for the ending? They were the best part of the movie!

I’m disappointed that I didn’t feel challenged by this movie. WALL-E induced guilt at our consumerist culture. Up fought the notion of old age being a handicap to adventure. Brave shows… uh, that parents and children sometimes have trouble talking to each other.